I walked along the edge of the access land above the Llantony valley in the eastern most fringes of the Brecon Beacons National Park. I was ostensibly looking for an errant group some 40 mins late to the check point but to be honest I was revelling in the lovely early morning sunshine. The willow warblers tinkling cry came at me from the trees along the field boundaries  like a little waterfall of song, the air was warm and full of insects, ahead of me the sun was highlighting, against the shadow of the hill, what I assumed was soft breeze blown down from the dandelion clocks in the meadows below. I walked into the gently moving cloud and was mugged by the scent of flowering cherry.

What I had assumed to be fairies ( as we called them as kids) was in fact a cloud of cherry flower petals being dislodged in the breeze. I stood there in a blizzard of petals my senses, sight, sound and smell assaulted by early summer sensations.

The reverie was broken by the crash of static from my radio, Jane, some three K up the valley had seen the group moving out of the field below her to rejoin the route they should have been on, a navigational hiccup, nothing more. Long days, good visability and clement weather remove a lot of the stress from groups not being where they should be, the issues surrounding an enforced camp on the hills are not too severe.

I turned around and made my way back under the watchful eye of a buzzard who was mewling at me from his position high above as he effortlessly soared in the thermals produced by the rapidly warming east facing ridge which rose to my left.

The Black Mountains were a welcome change, we seem to have been doing end to end Bronze expeditions in rural farmland for the past couple of months, my spirits felt freed by the wide open landscape. The soft and cool breeze was a welcome change to being baked   in Greece where we had been rock climbing one week previously, the hill climbs stretched out my legs and the horizon was now miles away as opposed to the end of the field we were walking accross.

Perhaps I doth protesteth too much about the countryside in which we conduct Bronze level expeditions. I make no effort to hide the fact that I love the soft English countryside, it is at odds to the grandeur and harshness of the mountains but has its own undeniable charms.

Three days previously I had been assessing eight groups from Kings Gloucester in Gloucestershire, one of the prettiest counties in England ( although the south west will always be my preference )

The countryside was home to more shades of green than you would find in an elves outfitters, the hedgerows were stuffed and overflowing with wild flowers of every colour, shade and hue. The mornings in the campsite were noisy indeed as every avian creature vied with their colleagues to make their voice soar above the rest. The days were quick to warm and a drowsiness affected the soul in such a pleasant way.

I have always had a love of nature and the natural world and being out in it throughout the year is no punishment to me, I might complain about the cold and the wet but I would not trade my current office for any other I have ever worked in.

A frustration, if I have one, is the lack of concern or awareness of what is around them shown by some of the individuals in our charge. We try hard to awaken an appreciation of nature in the groups and guide them to take on projects by which they will be encouraged to take an interest in the environment through which they are journeying, it does not always work. You can take a horse to water I guess.

To many the DofE is a tick in the box, another highlight on the cv, others may really start to understand team dynamics, their own strengths and weaknesses or in fact be launched upon a path that will take them into an appreciation of nature and the need to protect what we have whilst we have it.

The year turns, high summer is upon us, the exam season is almost at an end and silly season is about to come down on us like the proverbial ton of bricks.

There is still however a couple of weeks in which to take a deep breath and relax in the most beautiful time of the year.

The years go by faster and faster, of that I have no doubt, primarily its an age thing, time compresses in direct relation to the amount of it you have passed on the planet. Secondly its a question of avaliable hours, the less you have the faster they disappear.

We have over 60% more schools on board this year and whilst this was a welcome increase in our popularity and proof of our “getting it right” it did creep up and bite us in the proverbial. It has just meant no breaks to be getting on with our own “stuff” but then what we do takes us out into the environment we love so its not really a big problem.

The DofE year doesn’t really start for us, it now never really stops. When the schools go back in January we are in training and route setting, we are also busy checking all our equipment, buying new stuff and trying to get up stream of the approaching workload. March comes in, not like a lion more like a lamb with a trickle of early expeditions then before we know it we are head down rotating between Bronze, Silver and Gold expeditions, it leaves like a lion ( climatically ) and this year was no exception.

The weather patterns in the UK have undoubtedly changed, early March expeditions are viewed by some as causes for concern given the short daylight hours and likelihood of inclement weather, the past few years however have given us some beautiful warm sunny days prior to the equinox. The first week in March saw our first expedition for 13 Bronze groups from Kings Worcester out in the Cotswolds on a practice expedition, the sun shone, there was no wind and the daytime temps provided lovely walking weather, night may have been a tad chilly for some. 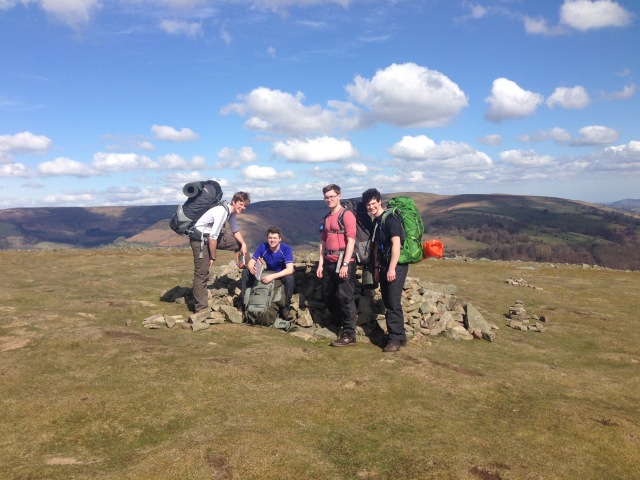 The world breathed a sigh of relief at the perceived departure of the wintersmith but this was not to last, the early spring turned wet then cold then snowy then windy and cold.

An early Easter came and went in a flurry of daffodils, shivering lambs and snow squalls and as I write this towards the end of April we are still heading for a weekend of northerly winds and low single digit daytime temperatures in the south downs.

However there are real benefits to all of this, the vast majority of expeditions at this time of the year are practice ones. Ask any experienced DofE manager what the biggest problem relating to weather is and they will advise a balmy practice experience. The groups are lulled into a false sense of security, they start to think that everything you have talked about, rain, soaked sleeping bags, windchill and hypothermia etc etc is all designed to scare them, nothing else. Then when they start out on their assessed, generally in bigger, wilder and harsher environments any lack of preparation can cause serious issues.

We did not get this this year, we got a real kicking on the majority of our expeditions, the participants were tested physically and mentally but more to the point their disciples were tested thoroughly. Two, three or four days of rain can be really tough but getting soaked, then frozen and blasted by a freezing wind can be dangerous in the extreme. You need to be fit, well fed and appropriately prepared, you also need to be disciplined in your approach to camp craft and personal care. When asked if they thought we had exaggerated things to one group they replied ” no, we just didn’t think it would happen to us ”

This year all 20 expeditions to date have gone excellently, there have been one or two drop outs, thats to be expected given the numbers we put through but the participants have risen to the challenge and coped admirably. Whiteouts on Dartmoor, blizzards in the Brecons, frozen tents in Swanage and the New Forest and -3 overnight in the Cotswolds are just a few of the hardships endured.

However we have prepared these guys for their assessed, no matter what conditions they get, they are disciplined, can navigate in most conditions, know the importance of nutrition, and having appropriate kit and looking after it all through tight discipline.

I cannot wait to see them all succeeding in their qualifying ventures at whatever level wherever they are.