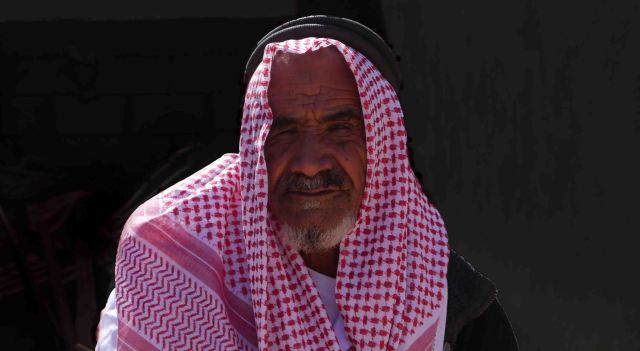 Our neighbour for the expedition, christened “Wee Jock” by Gav.

All men dream, but not equally. Those who dream by night in the dusty recesses of their minds, wake in the day to find that it was vanity: but the dreamers of the day are dangerous men, for they may act on their dreams with open eyes, to make them possible.
T.E Lawrence ( of Arabia )

Nothing needs to be said really

A half moon hung in the sky above us as we barrelled down the road from Amman towards Saudi Arabia, for some reason the moon looked like a gigantic Xmas tree decoration lit from below giving me a real impressions of our three dimensional position in space, the sun below the earth lighting the moon above. The desert on either side of us had vague lumpy shapes lit by the light of the stars and moon as we turned off the main Jordanian highway towards the Wadi Rum.

We were shown a room with a floor and three mattresses which was to be our accommodation for the next two weeks so we slept.

This trip had been a couple of years in the planning, not because it is difficult to get there but more from the point of view of Gav, Rab and my diary finding a mutually convenient space coinciding with the right kind of temperatures in the Jordanian desert. I arrived with absolutely no idea of what I was letting myself in for, I had been told that it was exciting and adventurous, we had had a brief discussion about what gear who was taking and I had borrowed some big cams from some mates, outside of this I had no real idea about it as Gav and Rab had planned it all, I was just a passenger. 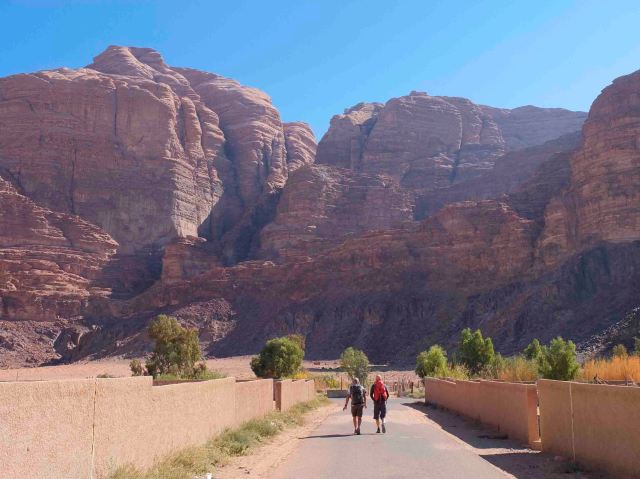 Off for an adventure ( G Swinton )

Next morning I awoke to see towering sandstone cliffs through the window of our room, they were glowing red in the early(ish) morning sun. I ventured out into the already hot desert sun to a completely third world scene. The roads in the Wadi rum were all pitted and cratered, along each side were piles of garbage and rotting/derelict vehicles. every wall was liberally spray painted. There were barefoot kids running about everywhere and on either side of the village towered 2000ft sandstone massifs.

Nothing for it we chose one of the nearest cliffs on the side of Jebel Rum and set out to do one of the routes on it. To get to the bottom of the route there were two pitches of Grade 3 (V.Diff/Severe) climbing, we soloed the first then put on rock boots and ropes for the second to take us to the bottom of the 5+ ( E1 5B) pitch. The rock in the Wadi Rum is sandstone but that is where the familiarity stops. The crags look like a gigantic chocolate cake where the chocolate has run into big gloops and walls.

A weather bit of sandstone, the small pebbles are completely natural

The wind has then done its best to erode the cliffs into the most imaginative shapes that nature can provide. This outofthisworld rock architecture is then riven by towering corners, never ending cracks and dubious walls. The route we chose to “get into the groove on” was not one of the best decisions. It was called “wall of lace” and that is exactly what is was, an eroded wall of very dubious rock, that was completely protected by threads that gave the ( not exactly wrong ) impression that if you were to fall off they would all instantaneously explode leaving you to plummet to an unsavoury end. We topped out and then set about abseiling off on the convenient bolted descents. Next lesson, the rock, eroded into all these wonderful shapes is covered in what are called “crisps”, little ears of rock that stick up on the top of overhangs, on slabs, in fact just about everwhere. the rock also has amazing powers of friction, all of these, crisps, cracks, friction features are designed to provide the most effective falling rope traps thus providing the next “challenge” to climbing here.

Gav belays in the shade

So dubious rock, falling rope traps, remote environment, poor route descriptions, high temperatures all discovered we then found out the next issue. It gets dark quick, at 4.30 the sun is in the sky, at 5.15 its pitch dark. We ran away to think things through. 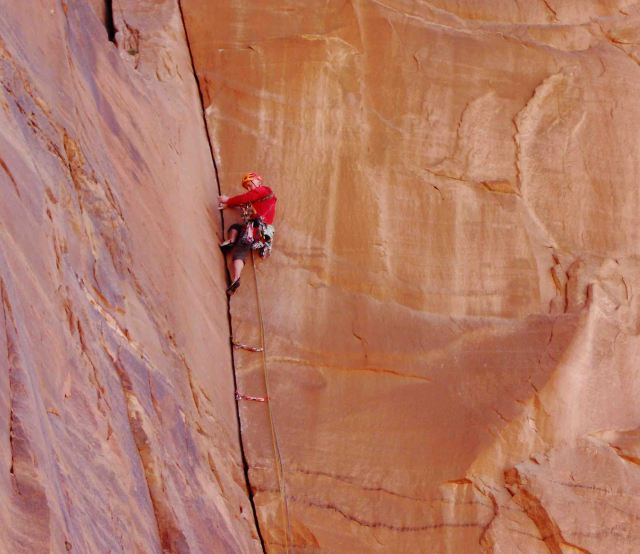 Pitch one of “The Beauty”

The next lesson came when we decided to climb a five pitch route called The Beauty. In order to access the route we had to traverse the Baraka canyon. The big rock massive’s on either side of the village/town are split by canyons called siques, these sometimes go all the way thorough on roughly the same level and sometimes not, in order to get from one level to the next you need to climb or abseil. Some of these siques are not completely travelled from one side to the other, people have been killed by flash floods and lost in them for days requiring rescue by the Jordanian army.  The route descriptions in the guide book are far from comprehensive with maybe a 80 word description combined with a half page diagram to explain a two day route through a three dimensional labyrinth. Grade three scrambling in extremely exposed and sometimes unprotect-able positions is the norm. You need to comfortably solo severe above massive drops to have any chance of coming anywhere near twice the guide book time given for the route. Starting to get the idea ? we were !

After the beauty we decided to do one of the Bedouin routes to the top of Jebel Rum, the highest point in the area. A Bedouin route is exactly what is described above, a passage through the siques to gain access to the summit domes. We chose Hammads route, the time given for the ascent is about 6 hours. We decided to climb it, sleep on the top and come back down it the next day. We left leisurely ( about 1000 ) by 1600 hrs we were about half way up and facing our first real climbing, two 5+ pitches to get out of the great sique. Half way through the second we gave up and retreated in darkness to the sandy floor of the sique to spend the night. Undeterred we were up at first light to let Gav force his way through the rock barriers, grade 5+ ? one was a horrible chimney of about 20m with no real holds and only 3 bolts to protect it. We pressed on, at about 1300hrs we were onto the maze of domes that make up the summit, we got lost, soloed a slab to gain access to what we thought was the route and ended up in a maze of sandstone domes that would not give us access to the summit. We decided to run away as we knew we were getting short of time but were nonetheless caught out by darkness with still 300m of down climbing to go. Another ( unplanned for ) night was spent on the hill. This however was one of my most memorable experiences of the trip.

Rab on the summit domes of Jebel Rum

It was rather uncomfortable as we were very short of water but the sounds of Wadi Rum far below echoed around us in all the canyons. The call of the muezzin sounded like it had been processed through a reverberation unit, the barking dogs and growls of the camels from 300m below became surreal sounds. No sooner had I put my head down than a meteorite hit the sky above me and broke up into three separate streaks of light across the sky to provide natural fireworks. This went on all night, or at least as long as I managed to stay awake and turned what was a bit of an epic into an experience that I will remember for the rest of my life. Dawn over the desert from our vantage point was equally amazing only scarred by my tongue sticking to the roof of my mouth and the 5 hours of down-climbing to reach the valley below and a cold bottle of Pepsi from Bobby the Bedouins supermarket.

We continued on in this vein for the two weeks of our trip climbing in the Barrah canyon and having another epic ( 9 hours of down climbing in the dark ) on one of the other Bedouin routes called Sabbahs route.

We also took a day out to visit Aquaba and swim on the coral reef there. This I found quite distressing really, the beach itself was filthy, covered in chicken bones, broken glass and cigarette ends. I swam out to the coral reef and watched three beautiful Lion fish as they hung about a reef which was chocked with grime and sludge, discarded beer tins washed about in the tidal swell and black spiny urchins ( the sign of a polluted reef ) proliferated. It may have been my imagination but I could swear that those fish regarded me with complete disgust for the destruction of their environment. 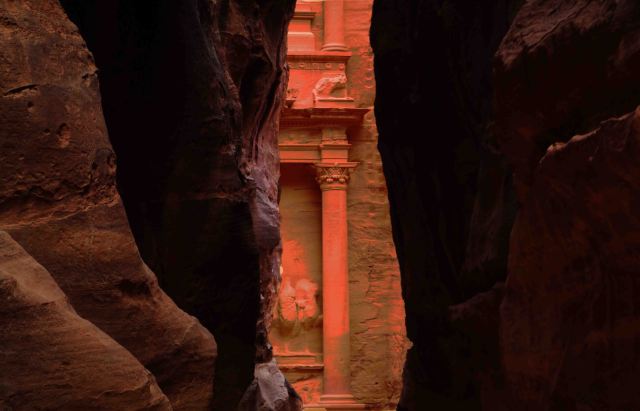 Where is Indiana Jones ?

We also went to Petra ( just, thanks to 9 hours of down climbing in the dark ) on our last day which was expensive ( £50 to get in ) but hey you got a ticket and a leaflet and continual hassle from the street traders in the place. It is totally amazing tho and well worth the visit.

So, was it worth it. 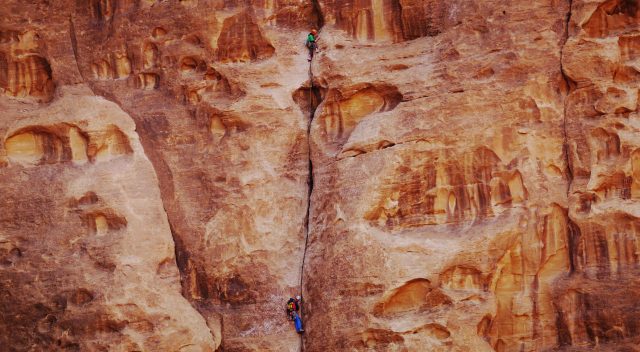 Rab and Gav on Merlins Wand

The two week trip cost about £1000 each, accommodation was £5.00 a night for a mattress on the floor but meals cooked for you by your hosts were ridiculously expensive for what they were. £5.00 for breakfast ( coffee, biscuits and cheese ) and £15 for an evening meal of pasta/rice and chicken, salad and vegetables with a bit of fruit and a sticky bun washed down by tea. We elected to cook our own breakfast and sometimes evening meals but this was made harder by the very limited fare you could buy in the shops there.

Wadi Rum itself is a third world shit heap that has disappeared up past the sphincter of the arsehole of the earth. Its dirty, noisy and pretty foul. The people there however are brilliant, friendly, helpful and very honest in everything they do.

The climbing and scrambling are an adventure in every sense of the word. Awesome lines on some superb rock and some very dubious rock. Poor descriptions and difficult descents just cry out the word EPIC every time you get on the rock. Its exciting but not to be underestimated, you need to be committed and experienced, prepared to travel fast and light ( alpine style ) to have any degree of success on the long summit routes.

Would I go back, yes I would as actually I think that to get the best out of this place you need a visit to get to know the nature of what you have let yourself in for. The second one may be even better !