Descending from Cairngorm after skills training

The large amounts of snow earlier in the year ensured that there was still enough of the white stuff around to make the winter skills course run by Jamie Bankhead for us a great success.

The group of seven students were split down into two smaller groups which enabled Jamie to focus on the safety over two days, one full on day for each group.

The first group of 3 plus teacher made their way up Coire Cas on Monday, stopping to look at axe and boot-work, risk-assessing various slopes and introducing basic self-belay and self arrest” We then moved onto steeper ground on the side of the Fiacaill a Coire Cas and introduced step-cutting, more advanced self-arrest and ultimately crampon skills. Suitably armed the group then progressed onto the ridge itself, and continued onto and over the top of Cairngorm.

After some discussion on the evening of day two and after skills had been embedded we decided to take on what is always a fairly challenging trip to Beinn MacDui on the final day.

5 pupils plus an additional instructor opted into this, in part persuaded by Jamie’s
assurances of a blue-sky day. As it turned out, the mist over the highest ground stubbornly refused to burn off, and the team got a taste of white-out navigation all the way from the flanks of Coire nan Lochain to the summit and back.

A great experience for these guys from Devon.

Thanks to Jamie for making this a great success

Some pictures from Choire’s January outing to Scotland.

Conditions were not ideal…

Making their way into the climbing.

Choire on the Belay

Approaching the top of the ridge 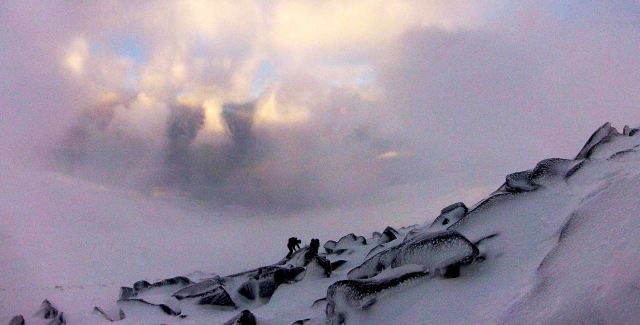